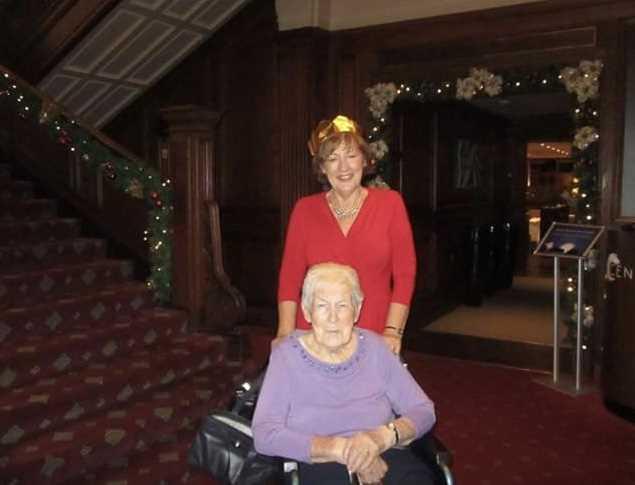 My mother developed dementia just over three years ago. Some days she would be fine and other days she would be confused and muddled. I always visited her every day and cared for her. After the dementia was diagnosed I went there several times a day, one day I was there eight times, but despite this, she was still in danger, because she started to wander off. Social services told me she had to go into a care home and gave me a list of homes in Newport.

I made surprise visits to every home on their list because I didn’t want any stage-managed visits, I wanted to see how they really were. I was appalled at most of them. One wouldn’t let me in, so it was crossed straight off the list. Others had tiny cramped rooms with old grubby mismatched furniture that looked like it came from a car boot sale.

I went to one, owned by a well known local estate agent. The matron showed me around and when I said I wanted my mother to have her own toilet, she put her hands on her hips, sighed and said “you told me she’s got dementia, what difference will it make? . I walked out.

One care home only served ready meals, no fresh food, most smelt of stale urine and the residents just sat in a communal room all day with no mental stimulation.

I eventually found a modern home with large rooms and her own bathroom. She was happy there, always laughing and joking with the staff, but ended up dying just three months later from a lack of medical care.

I visited her every day in the home, which on hindsight seemed to be a bit of a problem for some of the staff. One day I went there and she was out cold but had been fine the previous day. I asked the nurse what the problem was and her reply was a water infection. I told her mum had had quite a few which left her confused, as it does with most elderly people, but it had never left her in the state I saw her in.

This continued for several days, she was sleeping and I could hardly get a word out of her. I kept insisting to the nurse that it wasn’t normal and there was something wrong. Eventually, I was told they had put her on a drug for anxiety. I was shocked, my mother was very relaxed and happy there, she wasn’t a bit anxious.

I investigated and discovered the drug, Pregabalin a chemical cosh. The home obviously wanted her to be subdued. I demanded they take her off it and had a devil of a job with various medical people to achieve this. I told them if I had wanted my mother permanently sedated, I could have cared for her myself like that.

However, because she was sedated, she was unable to drink fluids and flush out the urine infection. I asked them to put her on a drip, they wouldn’t! I tried to get water into her myself and eventually, I told them I would take her to A&E. They told me that I couldn’t do that because she was now legally under their jurisdiction.

Eventually, after almost two weeks they called an ambulance, but she died two days later. The A&E staff were horrified when she was admitted. Her urine had turned to sepsis and she had suffered a stroke, but because she was out cold, the nurses at the home failed to notice.

I could do nothing about her treatment and death. I discovered there is no authority policing nursing homes. The Health and Social Services Inspectorate for Wales deals with complaints, which just get referred back to her social worker. Care homes got a slap on the wrist.

When these homes are inspected a majority receive an advance warning that an inspection is going to take place. We were paying £796 per week for her care. I couldn’t take legal action over what happened, because I wasn’t my mum’s dependent. I couldn’t do a thing about it. It’s a national disgrace.

It's over two years now since mum died and it’s only now that I feel able to speak about it. The circumstances of her death left me traumatised. I had been her carer for 10 years prior to her admission in the nursing home and I visited her every day in the home. Her loss was a huge blow because my care of her was hands-on and we were so close. I felt I was going insane trying to get the medical people within the home and outside to listen to me.

Pregabalin seems to be the normal drug in these places. When I demanded they take her off it, the nurse told me “Oh, don’t worry, they are all on it! It takes a few weeks to become accustomed to it, but they usually come through”.

My neighbour who has just died in another home of COVID was also put on pregabalin. When he went in, I warned his daughters to watch out for it. A few weeks in they told me the home had put him on it and they wouldn’t have realised without my warning. They demanded he was taken off it. That was a different home from the one my mum was in, so it seems the normal procedure.

A lot of people may not realise this is being done to their parents, but because I visited mum in the home every day, I noticed the change in her immediately and because I cared for her every day previously, I knew it wasn’t her normal reaction to a water infection.

I feel so angry and still feel frustrated that my attempts to help her were blocked and stalled. There must be thousands and thousands of people in these homes who are coshed by pregabalin. Obviously, when people are subdued and sleepy, it makes them easier to care for.

My mother was no trouble, she laughed and joked with the staff. On a few occasions, she would ask me to put her on the loo as soon as I got there. When I told her it wasn’t good to hang on and ought to have asked the staff to take her, she replied: ''Oh I don’t want to do that love, they’ve got enough to do”. My mum was no trouble to them at all, but they seem to just do it to everyone. Evidentally sedated residents are easier to care for.

No that I feel able to discuss it, I am happy to share what happened. I am certain it’s going on in many homes and I will do anything I can to stop it.

I have attached photos in order. The first is of me with my mother the Christmas before she died.

I visited on a Monday and she seemed fine, I wasn’t told they had started her on Pregabalin. The following day she was out cold. I took the photo of her in a nightdress on Thursday. The other photos were taken over the next 7 days. I took those photos thinking they would be used to back up a complaint asking for better care for her when she recovered. she never recovered. She died 3 or 4 days after the last photo.

With the exception of the Christmas photo, all of the others were taken just two weeks apart. We are now in the middle of the investigation with the hospital that we believe failed our mother. This has been a very long drawn out process but we are determined to get justice for our mother.''

These are the views of the author and do not necessary represent CCFTV views.
IF YOU ARE MEDIA AND WOULD LIKE TO TALK TO THIS FAMILY REGARDING THEIR MOTHER'S CARE EXPERIENCE PLEASE CONTACT US ATccftv.cares@gmail.com