After watching my own mother die in care I know I don’t want that for my children ... Karin Flower Director/Founder CelebFC

My mum, Peggy Mesure was 82 when she died. She had been living with vascular dementia for almost 10 years.

Karin Flower as a child with her mum, Peggy 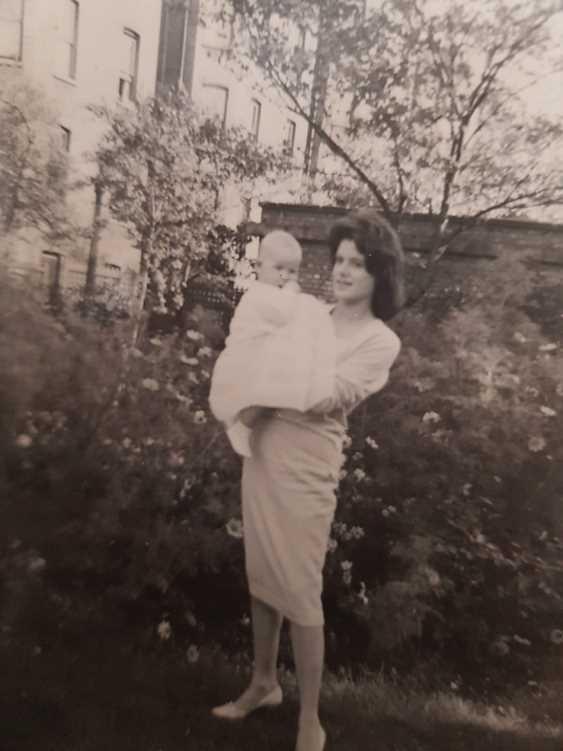 My Mother had been living with various illnesses and vascular dementia for almost 8 years. Her ability to remember, understand, communicate and reason has declined at a steady pace over these last 8 years. However every now & then there were flashes of her prior self – her sparkling personality, her wit, her intelligence (a published author) – which were both wonderful & cruel at the same time.

At the beginning of this journey, I tried to care for her at home, but with failing health myself, a specialist extra-care home was the sensible option. These facilities offer round the clock care (if and when needed) along with peace of mind for me that my mum has people on-site to help her with day-to-day tasks, which are becoming more difficult as time passes.

After a number of years of being in sheltered housing when her dementia started to really take hold; due to many occurrences of falls & lost glasses/keys/food (yes food), my sister and I decided to install CCTV in her flat.

This allowed us to have just a quick peek at her every now and then and that really helped with our peace of mind. We had purchased just a cheap, Wi-Fi enabled CCTV for inside her flat (not in communal areas) but it still took some persuading of the “facility” – as they didn’t want it initially.

I personally feel this should have been a standard part of the property, to safeguard not only mum, but the carers too (my mum was very vocal when she didn’t want to take her med’s & if you were listening outside you would believe she was being attacked).

Taking away my personal experiences, I am extremely confused as to how it’s widely recognised that childcare facilities, such as nurseries have CCTV, as do supermarkets to assist with monitoring the care for their charges; but those who care for the vulnerable elderly have no such monitoring system.

It’s been proven time and time again, that the main way to expose care failings for the most vulnerable is to film it.

With Safety Monitoring in all care homes and facilities as standard, relatives who have concerns would be reassured. There would be no pressure on the wonderful carers who do a thoroughly good job to whistleblow either as the CCTV could be monitored for any failings.

It would also help with the recruitment of only those who would be happy to be seen doing their job. Thus, weeding out the care workers who for whatever reason are just not meant to be in a role where vulnerable people are being looked after.

Coming forward to the home she was in just prior to her death in June 2020, I have very mixed thoughts. NOT about Safety monitoring, as I truly believe that would have helped on a number of occasions where failings happened and where other residents seemed to be left alone a lot (Highlighting preventable neglect and shoddy work practices can only be good). I am now also a firm believer that those with severe dementia and nursing needs should not be in the same nursing facility as the elderly with nursing needs.

The way of interacting with the two is just so very different and may not be easy for care professionals (even the most experienced) to flick back and forth from when going from room to room.

I also have (same as my beautiful mother did) a strong urge to push for assisted dying.

The way my mother died, I would not wish on my worst enemy. I truly believe the right law for the UK is one that allows dying people, with six months or less to live the option to control their death.

With someone with a family history of Dementia (like me), this is vital. I DO NOT want the same thing that happened to my beautiful mother to befall me or my daughters, As I now know from personal experience that watching someone you love die in pain, from malnutrition and dehydration is truly the most horrific experience.

If at some point, I do not have the choice to live (dementia or a terminal illness), when death is inevitable, I do not believe suffering should be allowed

I know this is not the CCFTV focus & I will explore this myself BUT for now, I am back working with CCFTV to get more people talking about safety monitoring. As surely, we should be easygoing from gasping at horrific footage shown after the event to all feel more secure in the knowledge our loved ones and maybe even one day “we” will be watched over and safe.