Our late mother's fall was evidenced by CCTV... her family couldn't view the footage to give us peace of mind...''

Care Campaign for the Vulnerable supports families in care that come to us reporting unwitnessed falls and how this can bring severe deterioration in the health of a loved one. The sudden decline often leads to a much loved relative sadly passing away and families tell us this is unacceptable when no clarity or transparency surrounds these ''falls''. One family contacted us to say their mother suffered an unwitnessed fall in the landing area in her care home during the Covid pandemic when families were restricted from visiting. The family said they requested to see the footage of the CCTV that captured their mothers fall. This request was refused by the care home.

CCFTV accompanied the family to the coroner's court on Wednesday 16th June 2021 where a verdict of ''accidental death was reported. The family told CCFTV outside the court '' Not knowing how our mother fell or why will always haunt us. The home had CCTV of what happened to our mother and I requested to view it to see full transparency surrounding what happened. The home refused this request. Why? Surely the home having safety monitoring is there for the peace of mind for families too. We therefore support the use of an independent monitoring system by a third party. We now have many doubts and questions over what happened. Our question will always be why were we not allow us to see what happened if CCTV was there for complete transparency?''

The family outside the Coroners Court after the verdict of ''accidental death'' was recorded. Their loved one suffered an unwitnessed fall, requiring hip surgery and soon after passed away. The family told CCFTV '' We asked to see the footage of our mothers fall, this didn't happen. Our question will always be ''why''? 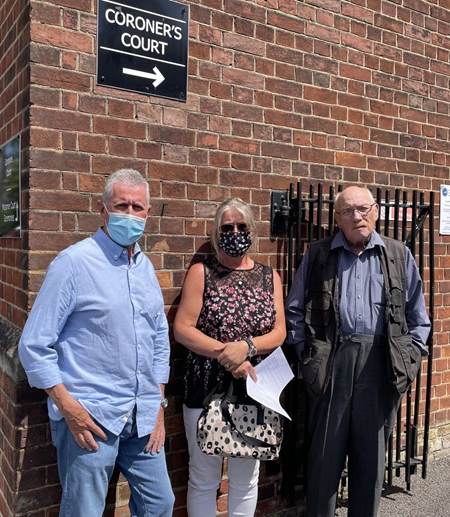 ''We received a call from our mothers Care Home on the afternoon of Tuesday 3 November 2020 advising us that our Mum had fallen and that an ambulance had been called. When we asked how it happened and what her injuries were we were advised that it was unwitnessed and she was on the floor by the chair on the landing.

We were told that the First Responders administered gas and air for the pain from Mum’s left hip and the Care Team Supervisor and the Care Home Manager remained with Mum to keep her calm. When the ambulance arrived Mum was taken to Stoke Mandeville Hospital. I followed the ambulance but was not allowed to accompany Mum into A&E due to COVID. She remained in A&E overnight, without a member of her family to support and reassure her, or ease her confusion. We were unable to help communicate her injuries or pain to the hospital staff, or provide any background medical history. A&E later confirmed to us that Mum had fractured her left hip and her right thumb.

At that point, we called the Care Home to see if it would be possible for them to review their camera footage of Mum’s fall as this might help the hospital doctors to ascertain the full extent of Mum’s injuries as she could not communicate for herself, and may have had other injuries that had perhaps gone undetected. We were advised that a witnessed report of her fall had been sent with Mum to A&E, and the camera footage was never shared or discussed with our family.

As Mum suffered from advanced Alzheimer’s some days were better than others. Although muddled, confused, very quietly spoken, and becoming frail, she was still mobile and took regular walks unaided along the first-floor landing, was physically capable of feeding herself, and with prompting, guidance and support would mostly comply with personal hygiene and getting dressed.

Her dementia had been slowly progressing in terms of her awareness of the world around her but on good days during COVID Lockdown she would stand on the first-floor landing and wave to us at the front door, recognising who we were. She had also recently asked me some appropriate questions e.g. did I need any money as I had agreed to buy her some chocolates and new slippers. Mum maintained good general health and our understanding was that she continued to take Ramipril for high blood pressure, Movicol for constipation and Cetirizine for allergies. She had also received the flu vaccine at the end of September 2020.

After her hip operation on Thursday 5 November, Mum was put into isolation as she had reportedly been exposed to COVID whilst in A&E, and she remained isolated for the full duration of her stay, without family or a carer to support or encourage her. Consequently, Mum made limited progress in the hospital. The staff agreed that we could visit Mum from outside looking in through the window to see if hearing our voices would aid Mum’s recovery. She recognised our voices and smiled which was encouraging as that is how she would have been prior to her fall. The hospital Physiotherapist also reported that Mum was strong enough to resist all attempts to be moved. We again checked with Care Home to ensure that there weren’t any other undetected injuries that were hindering Mum’s progress as she could not voice these for herself, and we were advised that the witnessed report of the fall should be with the hospital staff.

The Physiotherapist had been unaware of it. There was also a concern for Mum’s mental state as she appeared very flat and disinterested, refusing to move, eat or drink. The hospital staff suggested to us that this could possibly be linked to the effects of the anaesthetic and recovery could take longer in a patient with dementia. As Mum was confirmed to be consistently stable and clinically fit by all the hospital doctors, she was returned to the Care Home to a more familiar environment that could aid her recovery.

Once back at the home we were informed that Mum had begun to make some progress, talking, drinking, eating small amounts, even sitting in a chair with help, and reportedly complying with the Community Physiotherapist by moving her arms and legs.

Our regular enquiries on Mum’s progress were met with similar or sometimes encouraging progress. We were also advised and reassured by staff that if there was any deterioration or change in Mum’s condition they would call us. We felt that Mum was still ‘Mum’ and progress was still looking promising. We had no call from the home to advise otherwise and we were therefore still of the opinion that Mum was stable and making some progress.

On Friday 4 December 2020, we received a call from the care home to say that Mum wasn’t well and that the G.P. had been called. The G.P, called us a short while later to inform us of her diagnosis. She reported that Mum was listless and could possibly be withdrawing from life but she wasn’t sure. She had been told by the home that Mum had problems breathing but on examination, she confirmed her chest seemed clear, although an XRay could be done. She also felt that Mum may have an underlying urinary tract infection which could be making her more subdued. The GP then discussed our wishes for Mum's continuing care and we all agreed that it would be in Mum’s best interests to stay at the home.

Mum was prescribed a course of liquid antibiotics for the possible urinary tract infection and was to be kept comfortable. The GP confirmed she would visit the following week to see how Mum was doing. She also suggested we may wish to prepare ourselves that Mum could be withdrawing from life, although not imminently, but could be several weeks. We asked if it would be possible to visit Mum as we hadn’t been able to sit with her for so long due to COVID, the doctor agreed, reassuring us that nothing in her opinion would happen to Mum over the weekend. We made arrangements to see Mum the following day but she passed away in the night.

As her family, we always felt that it was important to ‘hear’ what Mum couldn’t say. We did that from the outset of her dementia thirteen years ago by being with her, watching her behaviour, her change in health and constantly finding ways to support and help her whilst keeping her safe, well, and able to access life to the best of her ability and desire. Due to the severe COVID restrictions regarding access to Mum we were unable to monitor the change in her after her discharge from the hospital and relied heavily on our calls to the care home.

We still seek these answers to gain a full and complete understanding of all the facts leading up to our Mum’s death so that we can remove the confusion over how she fell, the initial diagnosis after the fall including all the injuries sustained, clear up the discrepancies between the reports, and learn the true cause(s) for her sudden deterioration culminating in her death.''

Care Campaign for the Vulnerable is supporting the family and we continue our call for care providers to adopt independent safety monitoring. If you are interested in this case study please contact ccftv.cares@gmail.com