Every week CCFTV is sent distressing photos of serious injuries to elderly loved ones through unwitnessed incidents in care homes. Families are contacting us saying that not knowing how these "devastating " injuries occur and often result in a loved one passing away soon after, leaving them unable to gain closure and losing trust with the care home/authorities. CCFTV continues our call to all UK care providers to consider the many benefits of installing safety monitoring (CCTV) in communal areas in care homes so greater transparency can exist when unwitnessed or unexplained incidents/accidents happen.

One family told our organisation how their late mother suffered a reported 'fall' sustaining terrible injuries and soon after, sadly passed away. Please be warned if you scroll down you will see a very distressing photo of injuries that the family want us to publish to help raise awareness for CCTV in all dementia care homes. This is the family's account only.

Care Campaign for the Vulnerable has full permission from the family to highlight their late mother's injuries due to an unwitnessed and unexplained incident in a care home. The family support CCFTV in calling for safety monitoring to be made mandatory in communal areas and private rooms with consent, in all UK dementia care homes. Read the families account in the Daily Mirror https://www.mirror.co.uk/news/uk-news/desperate-families-demand-answers-after-26782018 ''Our mum was a proud grandmother and great-grandmother. What happened to her in a care home shouldn't have happened and no answers to the injuries she suffered when it was told receiving personal care is continuing to cause our family such heartache. It's the not knowing and she deserved more than that.'' Son. 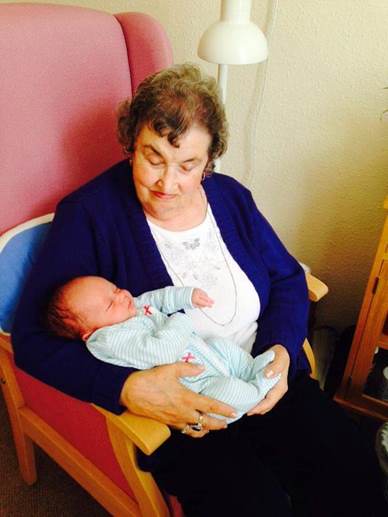 "On the 15th Nov 21 at 06.50 my sister received a phone call from a care worker at a Care Home where my mother resided and was informed that she and another carer found our mother in bed with a bump on her head, a bruised eye and nose bleed and my sister wrote down the conversation word for word. It is worth noting at this point that my mother was unable to walk unaided and had a hospital-type bed with rails so she could not fall out and even had she fallen out of bed she would not have had the physical strength be able to get herself off the floor and back into bed, the carer also confirmed that a non-emergency Paramedic had been asked to attend the Care Home.

There was some delay in the Paramedic attending and eventually, the care home manager telephoned my sister to confirm that our mother had been taken to the hospital and that in line with Care Home procedures the two carers assigned to my Mother's care were suspended from work pending an internal investigation. The completed internal investigation report was emailed to me and it was clear that the carers changed their statement from what was conveyed to my sister in a phone call. On 01st December my sister and my daughter attended the Care Home for a meeting with the Care Manager to get an update on our mother's accident and at that meeting, the manager confirmed that the carers involved had both given statements as to what happened and which contradicted the original account they gave my sister on the morning of the accident, the manager also confirmed that the carers involved had been given final written warnings for a breach of company procedures whilst our mother was in their care, and that they would be allowed to continue to work at the care home. My Daughter took minutes of the meeting for future reference.

Because of the conflicting accounts of what happened and the severity of our mother's head injury which included severe bruising around the right eye and extending to the neck plus a swelling over the right eye due to a fractured skull, we thought it best to have a third party investigate to rule out any foul play and informed the Police. We have updated the Police to confirm our mother's death however to date we are not clear how that investigation is progressing, or what conclusions they have reached, Safeguarding confirmed that the Police had been asked to interview the Carers but to date, we don’t know if that has been carried out.

A safeguarding report was raised by the care home and County Council Care Services have said they are investigating, my daughter last spoke with Safe Guarding on 03rd March 22 only to be informed that the investigation was ongoing some 16 weeks after our mother's accident. As far as I can determine safeguarding has failed to investigate promptly and to date has not put anything in place to protect the other residents and as such, they may still be at risk. CQC was also informed however we don’t know if their investigation is ongoing or if they have attended the Care Home.

My sister last visited my mother at the Care Home on 11th December 21 three days before her accident, and apart from the issues associated with advanced Dementia she was in reasonable health, and eating normally, however when she was admitted to the hospital following her accident she was unable to eat or drink despite the best efforts of nursing staff, she was also unable to speak and fell in and out of unconsciousness. I attended a best interest meeting with Doctors on 25th Nov 21 and it was decided that my mother would not benefit from forced eating via a tube into her stomach given her condition, Palliative Care was recommended and our mother was to be moved to a Nursing Home at some point in time, my mother was eventually moved to the Nursing Home on 01st Dec 21 where she deteriorated very quickly and she passed away on the 04th Dec 21. One week after being admitted to Hospital they telephoned our mother's Care Home asking if they could send her back however given the circumstances of her accident and the obvious risks associated with her returning to the Care Home we did not allow that to happen. We have all the hospital records on our Mothers' stay in Hospital
In Conclusion

• Before the accident and as far as we were aware our mother was in reasonable health, apart from issues associated with advanced Dementia, and she was eating normally, and most certainly would not have been considered as being the end of life, however following the accident and her admittance to Hospital she was unable to eat drink or speak and deteriorated quickly to end of life

• A cause of death could not be confirmed and so the Coroner ordered a Post Mortem to be carried out and an Interim Death certificate was issued so the funeral could take place, the precise cause of death was stated on the Death Certificate as follows:

Our Mother was suffering from advanced symptoms of vascular dementia, she could not walk, dress or wash and in care home terminology was a “double handler”, she had a fear of falling over and would not have had the physical strength to get herself up if she fell to the ground, and the family gave permission for her to sleep in a bed with side rails so she could not fall out.
As it stands the care home has determined that our mother's accident was an ''unwitnessed incident'', however, we believe that there was a serious breach of the Care Homes duty of care to our Mother leading to her fall whilst receiving personal care, and as such as a family we cannot have any closure concerning our mother's death until the care home tells our family how the 'accident' occurred."

CCFTV is supporting families coming to us reporting unexplained injuries happening in care. If you are interested in this case study or the work CCFTV is doing influencing the need for safety monitoring in all dementia care homes, please contact us at ccftv.cares@gmail.com.