Care Campaign for the Vulnerable throws our full support behind the Daily Express newspapers and campaigners to now see abuse towards our elderly become a 'hate crime. ' A report out in the Daily Express highlights the police are ' letting down our most vulnerable by not stamping down hard on perpetrators that target our older generation because of their frailty and in many cases vulnerability'. 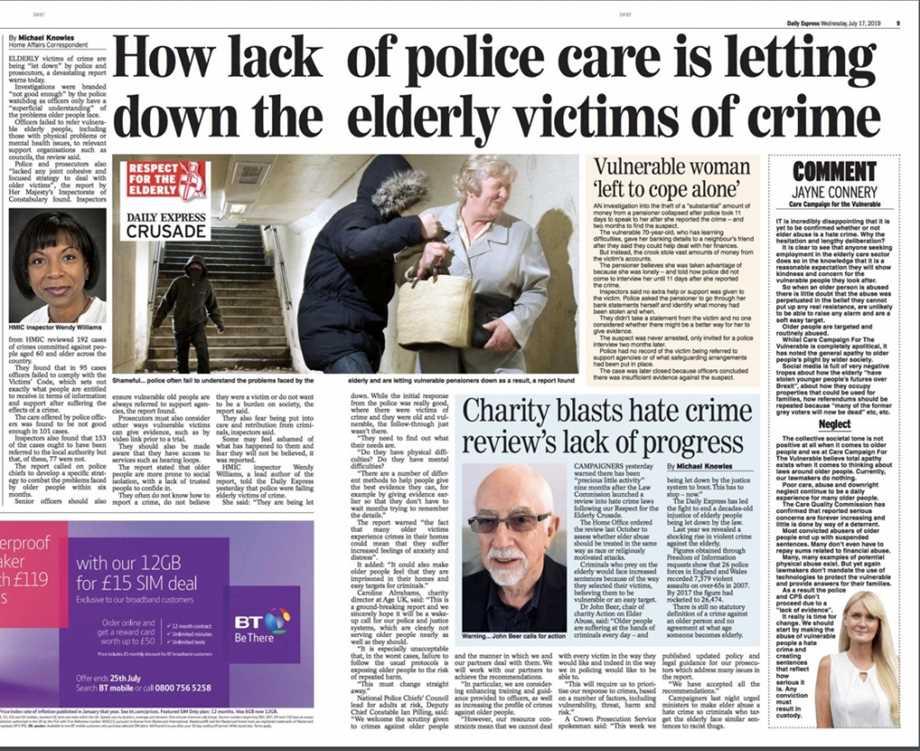 Care Campaign For The Vulnerable comments in the Daily Express on our older generation not receiving the justice owed when they are subjected to fraud and /physical abuse at the hands of those who are entrusted to their care. Many families contact Care Campaign for the Vulnerable distraught when loved ones have suffered severe injuries after wilful neglect in care homes and own homes but lack of visual evidence halts the CPS from bringing a prosecution and a deserved custodial sentence. While we understand the majority of care homes and carers deliver good safe care we are still appalled by correspondence sent in from families reporting CQC wanted to bring a prosecution towards a care provider but was denied due to lack of visual evidence.

It is incredibly disappointing that the Law Society has yet to confirm whether or not elder abuse is a hate crime.

Why the hesitation and lengthy deliberation is needed is beyond me. It is clear to CCFTV that anyone seeking employment in the elderly care sector does so in the knowledge that it is a reasonable expectation that person will show real kindness and concern for the vulnerable people they are to look after. Subsequently, when an older person is abused little doubt exists that the abuse was perpetrated in the belief that age means the elderly individual cannot put up any real resistance, that they are unlikely to be able to raise any sort of alarm, that they are a soft easy target and as a result create an opportunity for repeat offending. For all of those reasons but particularly because of age, older people are targeted and routinely abused.

Whilst CCFTV is completely apolitical, it nevertheless has noted the general apathy of older peoples plight by wider society. Social media, for example, is full of very negative tropes about elderly people, about ‘how they have stolen younger peoples futures over Brexit’ about how they occupy properties that could be used for families, how they are exempted from austerity taxes because of protected pensions, how referendums should be repeated because 'many of the former grey voters will now be dead’ etc etc. The collective societal tone is not positive at all when it comes to older people and it is no surprise we at CCFTV believe total apathy exists when it comes to thinking about older peoples laws.

Currently, our lawmakers do nothing. Poor care, abuse and downright neglect continue to be a daily experience for many older people. The Care Quality Commission has continued to confirm that reported serious concerns are forever increasing and little is done by way of a deterrent. Most convicted abusers of older people end up with suspended sentences, many don’t even have to repay sums that related to financial abuse. Many many examples of potential physical abuse exist yet again lawmakers don’t mandate the use of technologies to protect the vulnerable and provide answers for their families. As a result, Police and the CPS don’t proceed with incidences due to a ‘lack of evidence’.

It really is time society called for change. That change should start with making the abuse of vulnerable people a hate crime and creating sentences that are lengthy and reflective of the seriousness of a hate crime. Any conviction must result in a custodial sentence to ensure that anyone working with older people understands that cruelty and negligence will not ever be acceptable and if caught will automatically result in prison time.

Older peoples abuse should be considered as repugnant as child abuse and be subjected to the full force of the criminal justice system.